Nachos, nachos, nachos! A yummy snack that’s perfect for sharing. But some combinations can be very boring and lack flavour. There are two secrets to my scrumptious beef nachos recipe. The first is… use good quality, tasty tortillas, such as the ones from Manomasa. I used two varieties of their premium tortillas: Sea Salt & Cracked Black Pepper and Manchego & Green Olive. They are sturdy tortilla chips that withstand the weight of the toppings and the heat from the oven.

Each variety of Manomasa tortillas is shaped differently and they are packed with flavour, which is the key to this tasty beef nachos recipe. 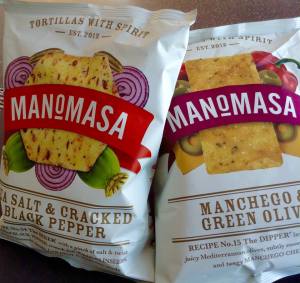 “A hexagonal seed-studded chip, with the subtle taste of onion and garlic, seasoned with a pinch of salt and fresh cracked black pepper. Poppy, sunflower, linseed and the distinctive warmth of caraway seeds lend a further depth of flavour and texture”. (Manomasa Press Release, Palm PR)

The Manchego & Green Olive variety of tortillas brings out the flavours of cheddar, chilli and black olives in my recipe.

“This rectangular chip is layered with juicy Mediterranean olives, spicy pimiento and tangy Manchego cheese made in the La Mancha region of Spain. The cheese is grated, melted and slow dried to allow the flavours to stay sharp and remain full of character”. (Manomasa Press Release, Palm PR)

My second secret is to make a succulent tomato sauce to flavour the beef mince. This also keeps the mince from getting too dry. I used a hand blender to blitz some plum tomatoes, garlic, onions and my home grown Espelette peppers. Use hotter peppers if you like it extra spicy. Chilli fiends can also add Tabasco sauce or other hot sauce at the end, on top of the baked nachos.

You only need half a cup of tomato sauce to flavour the beef mince so you can save the leftover sauce for pizza or pasta. It will be even more succulent after a few days in the fridge!

For a shortcut, you can always use ready made sauce in a jar but it won’t be as tasty.

Using a hand blender, add the chopped onion, chilli pepper and garlic to the plum tomatoes. Blitz until smooth. Set aside. 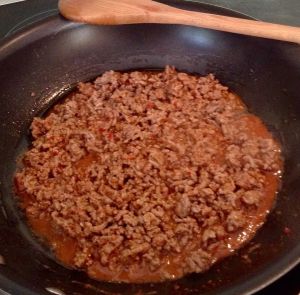 Add a little olive oil to a skillet and cook the beef mince until it is no longer pink. Stir in one half cup (125ml) of the tomato sauce and keep cooking until the sauce has thickened a bit and blended with the mince.

On a baking tray, spread out a whole pack (160g) of Manomasa Sea Salt & Cracked Black Pepper tortillas and half a pack of the Manchego & Green Olive tortilla chips.

Place in the top half of the oven and bake for 4 or 5 minutes until the cheese has melted.

Use a spatula to scoop the nachos onto plates. Serves 4 (or 2 hungry teenagers!). 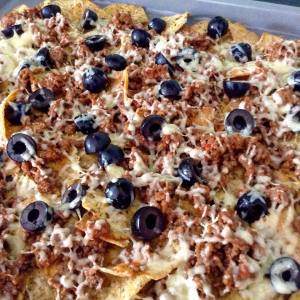 You can find Manomasa tortillas at Waitrose, Ocado, Whole Foods Market, Fortnum & Mason as well as independent delis and farm shops, such as The Larder at Burwash Manor near Cambridge.

What are your suggestions for additional toppings? Let me know in the comments below.

Although Manomasa provided me with free samples of their tortillas through Palm PR, all views are my own. I did not receive compensation for my recipe or this blog post.