On August 11, 2018 talented baker Jin Yee Chung of The Baking Jin hosted his very first pop up, titled East Meets West. I was delighted to experience Jin’s take on Afternoon Tea, along with a group of guests who were eager to try his bakes or have been long time fans. The pop up took place at Romano’s. We all gathered around an inviting communal table on a Saturday afternoon. 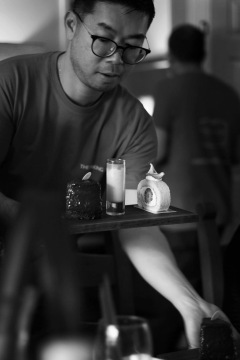 Jin, who hails from Borneo, is a software engineer by day (that’s Dr Jin – he has a PhD) and a baker by night. After winning the Cambridge Bake Off in 2015 with his stunning DNA cake, Jin continued baking, experimenting and perfecting his cakes. He is known for his light and airy chiffon cakes and has a growing list of customers for private orders. He also supplies a few cafés and has been featured in The Cambridgeshire Cook Book (2015) and The Cambridgeshire Cook Book: Second Helpings (2018). 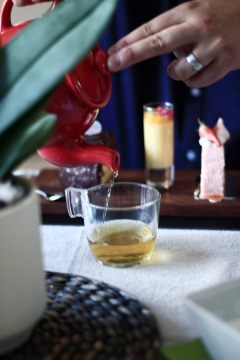 East Meets West was loosely based on the concept of Afternoon Tea with a sweet and savoury parade of fusion dishes from Jin’s native Malaysia and beyond, paired with two intriguing teas: Jiaogulan and Chrysanthemum.

We were welcomed with a gorgeous mocktail which Jin named Blue Purple, because it changed colour. A carafe of lime-honey liquid was poured into each glass of blue pea flower liquid, which changed the colour of the mocktail from blue to purple. The batch of blue pea flowers, grown in the garden of Jin’s late grandparents in Malaysia, was picked and dried by his aunties. How special is that? On a more local note the honey was from East Hatley, only 15 miles from Cambridge. A pandan leaf was placed into the mocktail for a hit of its sweet, vanilla-like aroma. We nibbled on lobster crackers and keropok (prawn crackers) before we took our seats. 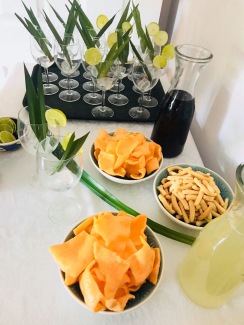 END_OF_DOCUMENT_TOKEN_TO_BE_REPLACED

A new and unique eating experience has come to the UK and it’s all taking off in Cambridge – specifically at Food Social, The Grafton’s open plan dining quarter by the Vue cinema. Amélie is the first UK restaurant dedicated to serving Flammekueche, a dish dating back to the 14th century from the Alsace region of France, close to the German border. Flammekueche is made with thinly stretched dough topped with fresh ingredients and baked in a very hot oven for about 90 seconds, leaving the edges crisp and slightly charred. It may be quick to prepare and bake but it’s not your average fast food. It’s an upgrade from fast food – top quality ingredients are used and everything is freshly cooked. Flammekueche is the Alsatian word for this delicacy, which Amélie have loosely translated as French fire bread. It’s also called tarte flambée in French and Flammkuchen in German. 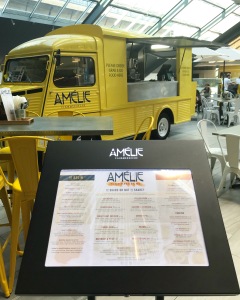 Food Social is part of The Grafton’s extensive refurbishment and Amélie is the first independent restaurant – of hopefully more indie brands – to occupy a space. The shopping centre’s refurbishment is coming along nicely (thumbs up to the loos!) and Amélie has already given the place a wow factor with its yellow Citroen H van on the upper floor. 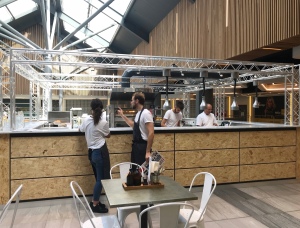 The 55-cover family friendly restaurant has an open kitchen with individual and communal seating. The menu, designed for sharing (only if you wish), focuses of both savoury and sweet Flammekueche but also features a selection of starters such as dips, salads and meat boards. There are lots of options on the menu so there’s something to please everyone, even a mini Flammekueche for children. 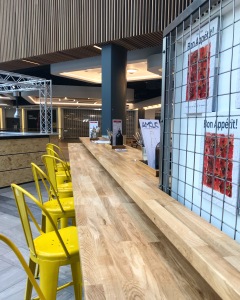