I love it when a plan comes together. It’s no secret that I’m a great fan of the sweet treats produced by Andrew Hunter (Dulcedo), Jin Yee Chung (The Baking Jin) and Riadh Falvo (Bumble & Oak), but what if I brought together these three inventive makers for a special event? Some of us knew each other well, others only a little… but somehow they got on board with my idea for a collaboration, even though it was a lot of extra work for them. Jin and Riadh have full time jobs. Andrew and Joanna lost several hours of trade that day by closing early, not to mention the effort involved in all the preparation and using Dulcedo as the venue. I am so grateful for their trust in me to sell out the event. 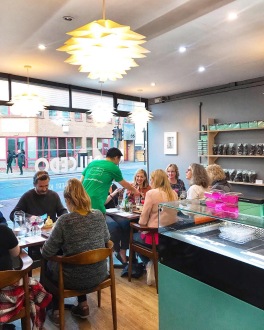 The three of them concentrated on designing and developing the 8-course menu – a sweet (mostly) and savoury parade of innovative dishes, fusion bakes, high end patisserie and artisan chocolate. I took care of all the marketing and admin stuff, such as the event description, photos and ticket sales. Riadh came up with the name The Tasting Table.

The event formed part of my personal commitment to support independent producers and businesses so I didn’t charge for my services and paid for my own ticket and drinks. I did have a few advantages though, such as guaranteeing a ticket for myself and Paulo and getting a sneak peek at the menu so I could type it up and print individual copies. And of course, a glimpse behind the scenes is always a privilege.

There was such good energy. Paulo and I helped set up the tables. Andrew, Jin, Riadh and their teams (Joanna, Lorène, Gerrard, Aidan, Tim and Anna) worked so well together, with everyone stepping in and helping each other out. No egos!

The collaborative menu by Dulcedo, The Baking Jin and Bumble & Oak was stunning and they made their distinct styles flow seamlessly. I was delighted to be part of a group of 26 people to indulge in their finely prepared menu of vibrant flavours and striking textures. It was also a real treat to have Andrew, Jin and Riadh introduce and explain each course.

Andrew, an accomplished pastry chef with previous experience at distinguished Cambridge colleges Clare and King’s, kicked off the menu with a gin, lemon and meringue cocktail that was part drink / part dessert (we ate the meringue with a spoon). 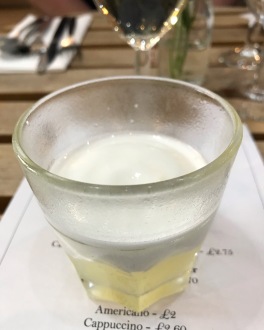 For those who pre-ordered a non-alcoholic version, Andrew created a cold maceration of green tea with apricot, which I’m told was very good.

Jin, software engineer by day and baker by night who won the 2015 Cambridge Bake Off, served his first banana leaf-lined board – a sweet and savoury course inspired by Nyonya cuisine, featuring two creations. 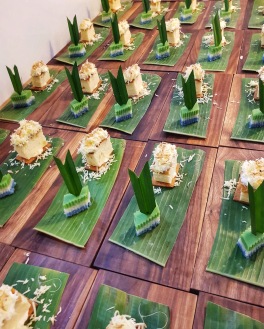 On the left sat a kuih (sweet dessert) called Seri Muka, which translates to “radiant face” – definitely my expression eating this kuih and smelling the sweet fragrance of the pandan leaf inserted at the top. The seri muka had a taste combination of sweet and savoury, a sticky texture and vibrant colours (natural extracts from pandan leaves and blue pea flowers), all forming three delicious layers of pandan custard (top), coconut glutinous rice (middle) and on the bottom, blue pea flowers grown in the garden of Jin’s late grandparents in Malaysia and picked and dried by his aunties. I tried Jin’s seri muka a few times before and it was served at his first Afternoon Tea (I wrote about it here). The texture takes some getting used to but I can’t get enough of it now! 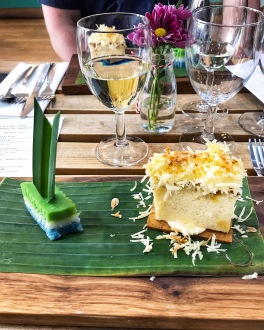 The Sambal Cake was another of Jin’s genius inventions: a fluffy cheddar cheese cake topped with grated cheddar and dried shrimp, on a sambal chilli biscuit. It was beautifully put together and I loved the progression of flavours of sweet, salty, fishy and spicy. There was obviously a lot of thought and effort put into this cake and I think it brought out the true epicurean in Jin. There is no end to this man’s talents.

Riadh, a trained chocolatier and rare tea specialist with a background in Nutrition, Botany and Herbal Pharmacy, focused her creations on chocolate. A Glass of Mayan Chocolate was a nod to the Mayans, believed to be the first to discover cocoa. They prepared chocolate strictly for drinking and combined it with spices. This traditional savoury tasting of chocolate in a glass (with a sliver of real vanilla) was accompanied by South American chilli (a mixture of ancho, chipotle and a very smoky tomato pepper), cane sugar and yellow maca. It was fun to try the different accompaniments and sip the bitter chocolate.

Andrew’s next course provided a refreshing break with fresh and frozen raspberries, sweet drop peppers, a cream mousse with a touch of raspberry, red vein sorrel and Parmesan crisps. The cold raspberries made the dish a sort of palate cleanser, complemented by sweet, earthy and salty flavours. Absolutely delicious! 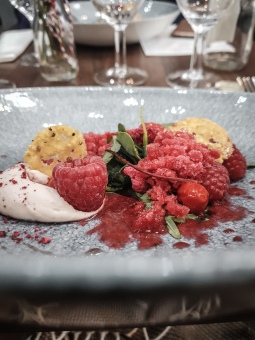 Jin’s turn was up next with three remarkable desserts. His second board featured two of his Southeast Asian inspired bakes – both super light chiffon cakes, Jin’s speciality. The pandan chiffon cake with black sesame cream was topped with a shard of black and white sesame candy. This one was slightly different to the pandan cakes he supplies to Cambridgeshire cafés – it was smaller, softer and lighter, using fresh cream and served cold.

The very delicious “Not Just A Lemon Roll” featured all things lemon: a sponge made of lemon & timur berry (which has a lemony, woody aroma), lemon grass, agar-agar (a vegetable gelatin) and a lemon & limoncello cream. The timur berry was sourced from Sam at Culinaris on Mill Road.

Jin’s third sweet treat was a traditional one. Gula Melaka Sago is the first dessert Jin’s mum taught him to make when he was 10 years old. It is a pudding made with gula melaka (palm sugar) syrup, coconut milk and sago pearls (a starch taken from the spongy centre of sago palm stems, similar to tapioca). The presentation was clever – it was reminiscent of a glass of Guinness but with a beautiful floating shape in it. Jin used jelly moulds to shape the sago into spirals or stars. 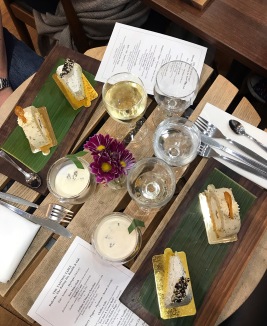 Riadh’s presentation of her Terrarium of Truffles was a reflection of her botany background: a glass terrarium housing three different conker-shaped truffles lightly buried in a fondant dark biscuit and finished with a mint leaf. The terrariums were even served with white gloves to eliminate fingerprints.

Paulo and I had a different terrarium, which was made for sharing and just as eye-catching as the others. 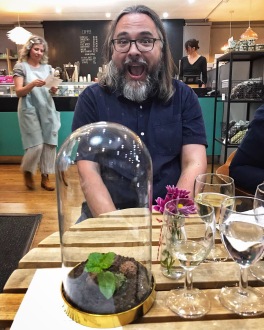 There was a lot of effort put into the truffle ingredients. They were truffles unlike any I had before and it was a pleasure to taste something so unusual yet delightful. The three truffles were: 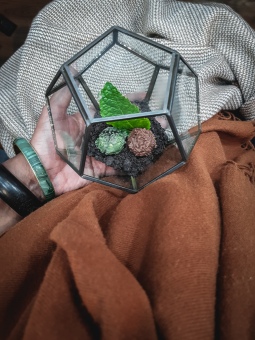 Andrew then took us to an apple orchard with his next wonderful dish – a patisserie apple filled with apple compote and apple pudding mousse, dill ice cream on streusel with spice, a tarte tatin and apple jellies. The ice cream was served cold and the tart was still warm – a perfect execution by Andrew and pâtissière Lorène.

The last course was Riadh’s aptly titled A Cheese & Cracker Finish, featuring Roquefort (a pungent soft blue cheese) in a 70% dark Ecuadorian chocolate log, accompanied by a plum & date biscuit on a white and dark chocolate mendiant. The richness and creaminess of the Roquefort was offset by the sugarless milk ganache. I never thought cheese and chocolate would go so well together. I would love to explore more chocolate and cheese tastings.

Andrew, Jin and Riadh did amazingly well with their spectacular creations. The challenge was set and they wowed us! It was a pleasure to get more insight into what Dulcedo, The Baking Jin and Bumble & Oak can offer. We are really lucky to have such talented independent producers right here in Cambridge. 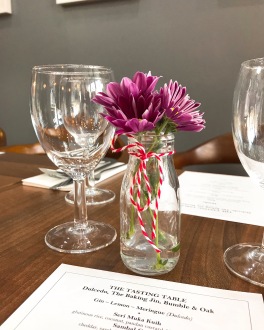 Although I played a part in organising and promoting the event, all views are my own. It is based on my experience at my own cost and I did not receive compensation for my review.

6 thoughts on “The Tasting Table with Dulcedo, The Baking Jin and Bumble & Oak – Cambridge (UK)”